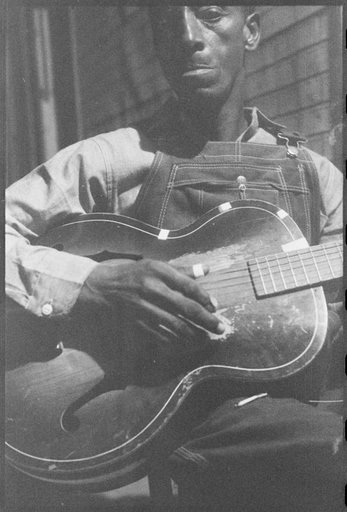 Mississippi Fred McDowell’s music is urgent and commanding. His playing is hugely rhythmic and dynamic, sparse and overflowing, passionate and heartfelt. He was born in Rossville, Tennessee where his parents died while he was very young. He was then sent to live with a sister who lived in Mississippi. At age 14 he learned how to play guitar after seeing Charlie Patton and Eli Green performing, and moved to Memphis while he was still a young man. There he worked as a farmer and field hand, playing music for tips wherever and whenever he had the chance.

He soon moved back to Como, Mississippi and continued this lifestyle, largely overlooked and unrecorded for the next thirty years. He was first recorded in 1959 by Alan Lomax, who visited his farm and recorded 14 of his songs for what became the legendary ‘First Recordings’ album. He then went back to his previous routine, and likely would have lived out his life following the same pattern had Chris Strachwitz of Arhoolie records not tracked him down in 1964 and recorded two classic albums, Fred McDowell Volumes 1 & 2. It was also Strachwitz who convinced him to become a professional musician. McDowell’s appearance on the music scene during the folk revival shocked the community as this completely unknown, passionate and totally authentic Delta blues musician electrified the scene with his powerful performances.

He soon switched to playing electric guitar for the extra clarity it brought, yet kept to his roots, shunning the modern electric blues pioneered by the likes of Muddy Waters. He didn’t make his feelings about this music secret, and in 1969 released the album, “I don’t play no Rock’n’Roll. He became a huge influence on many modern players, the Rolling Stones went so far as to record a cover of his song ‘You gotta move’ for their album ‘Sticky Fingers.’ Fred McDowell is also considered to be one of the first bluesmen from the North Mississippi region to achieve fame. The North Mississippi, or Hill Country style remains rooted closer to its African roots. This music is characterized by utilizing repeating bass lines, melodies and using with single chords or very sparse chord changes to create a droning, hypnotic effect. Other Hill Country musicians include R.L. Burnside, Junior Kimbrough and T-Model Ford, among others. Fat Possum Records has done an amazing job of finding and recording a lot of these previously unknown artists.

Video
This is a great clip of the song My Babe recorded sometime in the ’60’s, MFM just killing it on the electric.

As with a lot of the musicians we discuss here, its hard to identify any one album as ‘definitive,’ they all have something to offer, even if it’s alternate versions of songs you already know. Here are a few recommendations which highlight different aspects of his style, and some of our favorite performances. 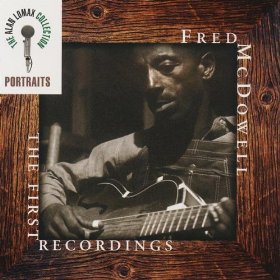 The original 14 songs recorded by Alan Lomax in 1959, mandatory listening.

The Best of Mississippi Fred McDowell Great Compilation from the early days of Arhoolie, recorded by Chris Strachwitz. Even better is the unfortunately OOP album Fred McDowell: Mississippi Delta Blues which contains the last two songs ever recorded by his early mentor Eli Green.

I Do Not Play No Rock ‘N’ Roll: The Complete Sessions A rough and tumble collection of great songs, stories and playing from his electric days. This release by Yazoo captured great sets by both McDowell and Big Joe Williams. Its fantastic to watch, but unfortunately the entire DVD is under an hour. Is it worth it? Depends how badly you want to see the man live. Look for it in the library first.