“People have learned how to strum a guitar, but they don’t have the soul. They don’t feel it from the heart. It hurts me. I’m killin’ myself to tell them how it is.”
-Lightnin’ Hopkins, 1968 Interview

Sam ‘Lightnin’ Hopkins was a very influential Texas Blues musician whose songs have inspired everyone from the likes of Jimi Hendrix and Stevie Ray Vaughn to The Red Hot Chili Peppers, and many points in between. Hopkins began his career in the 1920’s and for the next sixty years barely altered inimitable his style.

Sam’s father died while he was still a young child. He was taught how to play guitar by his older brother Joel, his first instrument a cigar box guitar with chicken wire strings. When he was eight years old he met and befriended Blind Lemon Jefferson, who encouraged him and gave him some playing tips. He shadowed Jefferson, following him to church socials where he would play along with his cigar box guitar. He was soon playing with his older cousin, the formidable Texas Alexander. When Hopkins hit his teens he became a traveling bluesman, hopping trains, gambling and busking on street corners throughout the state. This rough and tumble lifestyle landed him in jail in the mid 30’s.

Upon his release he began playing with his cousin Alexander once again, but money was tight all around and they were both forced to take a series of day jobs. The pair finally had their first big break in 1946 when they were offered a recording contract with Aladdin Records. On the day of the session, only Sam showed up at the studio where he accompanied the pianist Wilson ‘Thunder’ Smith on the song ‘Katie Mae.’ The duo were billed as ‘Thunder and Lightnin,’ a moniker which stuck with Hopkins for the rest of his career. He eventually cut nearly 50 sides for Aladdin Records, while at the same time moonlighting with other record companies on the side.

Lightnin’ Hopkins toured and recorded prolifically until the mid 50’s when the new Chicago electric blues began to make his acoustic style appear old fashioned. In 1959, a young blues enthusiast named Sam Charters managed to track him down, and together they recorded ‘The Roots of Lightning Hopkins’ in his apartment, using a guitar he had to borrow. Hopkins had lost none of his intensity, and when the album was released it launched him to legendary status alongside such blues heroes as Muddy Waters and John Lee Hooker. He began to record again and became incredible prolific, cutting roughly 35 albums in the 60’s for any label that would pay him cash up front. Many of his songs were improvised on the spot, they were what he called ‘air songs,’ composed about whatever was on his mind when he entered the studio.

All links open in a new window 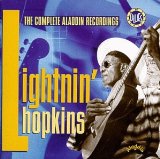 Scorching Texas blues from Hopkins days in Houston in the 50’s. The Roots of Lightnin’ Hopkins

The 1959 recordings that put Lightnin’ back on the map, includes Penitentiary Blues, Bad Luck and Remembrances of Blind Lemon. This album crackles with energy and emotion, one of my favorites. This Rhino compilation is a great overview of Lightning Hopkins career, the recordings date between 1947 to 1969. The emphasis here is on his earlier work and treads very lightly on the music recorded after his ‘rediscovery.’ Stunning songs and guitar work from this awesome album composed of sides recorded throughout the sixties. Lightnin’ Hopkins: His Life and Blues by Alan B. Govenar

By the time of his death in 1982, Sam ‘Lightnin’ Hopkins was likely the most recorded blues artist in history. This brilliant new biography–the first book ever written about him–illuminates the many contradictions of the man and his myth.

The Guitar Of Lightnin’ Hopkins DVD

Offered here are all the basics, many of the secrets and tricks of Lightnin’s deeply accomplished, deceptively simple acoustic Texas boogie guitar style. This lesson features rare video footage of Lightnin from the 1950’s and 1960’s. Lightnin plays the tune and then Ernie analyzes it lick by lick. This video presents a wonderful opportunity to go the source of Texas blues and learn from the master who inspired generations of guitar heroes. Titles include: Pull A Party, Goin Down Slow, Shining Moon, Baby Please Don t Go and Take Me Back.

In 1960, German filmmaker Dietrich Wavzyn captured Lightnin’ on his Houston home turf, and the clips here of him perfoming on the street and in a Houston bar are rare glimpses into his milieu (and the earliest known footage of Hopkins). Seven years later, a relaxed Lightnin’ delivered engaging folk-blues performances for Seattle folklorists, five of which appear here. In 1970 he painted a masterful and entertaining musical self-portrait in eight songs from the Los Angeles PBS shows Boboquivari. Finally, Lightnin’s “lion-in-winter” appearance on Austin City Limits in 1979 shows a still powerful country bluesman disproving the old dog/new tricks adage with a Stratocaster and a wah-wah pedal! 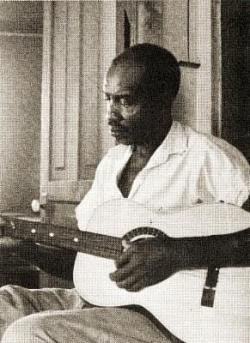